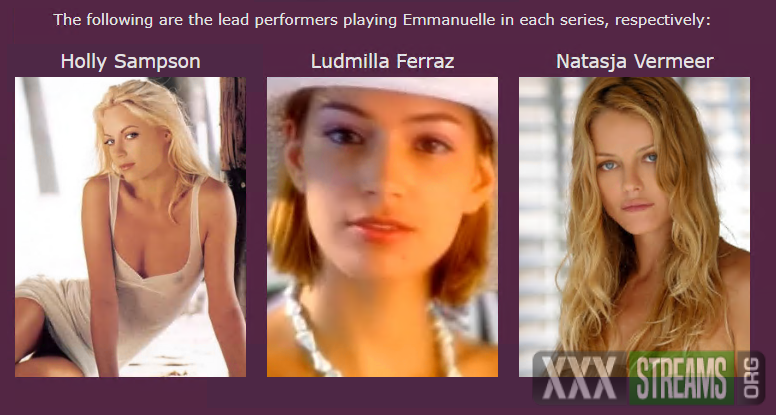 In the first collection, Emmanuelle 2000, the titular character is played by Holly Sampson. This was back before she had a boob job, before she got back into hardcore, and quite a while before everyone knew her as Tiger Woods’ infamous mistress. The films in this series are all generally centered around a device that allows you to either control or inhabit the bodies of other people, so the movies contain elements of mind control and telepathy, body inhabiting/possession, and various other sci-fi shenanigans.

The second collection, Emmanuelle’s Private Collection (no relation to the studio Private), has Dutch actress and model, Natasja Vermeer, starring as Emmanuelle. While two of the films are a bit more grounded, they mostly veer heavily into the supernatural with ghosts and love goddesses and even Dracula. Yeah, Dracula. At a bachelorette party. Dude, these movies got weird. Despite the weirdness, these tend to be more dramatic than the 2000 series.

Also included in this pack is Emmanuelle in Rio, which was separate from both of these and released in the year between the two series. No sci-fi, no paranormal, all pretty tame stuff. It leans toward the more romantic side of softcore films with some light drama. It stars Brazilian Ludmilla Ferraz in the title role, and this remains her only film/TV role to date.

With regards to each series, I don’t quite know the exact order or if there’s any continuity between the films. I’ve put Emmanuelle 2000 releases in the order that they’re listed on Wikipedia, but there seems to be no real continuity between them. In some films, Emmanuelle has the mind control device, in others, it’s created by someone else. The release years and, well, pretty much everything regarding the Private Collection is all over the place. Different websites tend to all have different release orders and dates and it’s all very unclear. All I know is that the first film in each folder is, as far as I can tell, the first film in that series (despite the weird ordering on Wikipedia). After that, no fucking idea, I just numbered them based on what little I could tell from the release dates. Just enjoy the ride.

This was certainly an interesting pack to prepare. I transcoded all of these files myself with Handbrake from the source DVD VOB files, with the only exception being Sex Goddess in the Private Collection which was downloaded as it is (I did remove the Russian audio from the file, but no other alterations were made).

The quality is… okay. Normal for the time and early 2000s DVD quality, I’d say. I’ll have the specific resolutions in the details for every film below, but since Handbrake did some autocropping, some of them will appear to be non-standard. Rounded to the standard resolutions, Emmanuelle 2000 is mixed between 480p and 570p, Rio is 480p, and The Private Collection are all 434p.

Comparing the VOB files and the MP4s, there isn’t really any noticeable quality difference, especially since the sources weren’t particularly fantastic themselves (still watchable, though!). Anything that’s blurry in the files here was blurry in the original source. Audio wasn’t remuxed or re-encoded, it’s all original source AC-3 except Sex Goddess, which has both the original AC-3 audio and an AAC track.

Body features include: blondes, brunettes, redheads, raven hair, long hair, medium hair, short hair, small tits, medium tits, large tits, mostly natural but some fake. As far as I can tell, all women are either shaved or neatly trimmed, so no bushes here. There are extremely light tattoos (eg. stuff like armband tattoos around biceps, etc.) here and there, but most of the women have no ink. The vast majority of performers are Caucasian, a few are Latin American and there is, I believe, one Asian (in the title “Emmanuelle in Paradise”).

Plot themes include: sci-fi shenanigans, paranormal subjects, mind control, telepathy, technology-assisted astral projection, technology-assisted possession, ghosts, spirits, vampires, carnivals, all sorts of locations. Sex takes place all over, whether it’s the bedroom, office, massage parlors, in a convertible car, or in and around swimming pools. The earlier series leans much more on the comical and absurd side, while the later series takes itself a little more seriously at some points.

That should cover most of it. Onto the films themselves…

Regular performers in Emmanuelle 2000 (eg. appear in two films or more) include:

Regular performers in The Private Collection (eg. appear in two films or more) include: